Thank you to dedicated readers (Jordan, dad; updated! there are more: Laurel, Matt) continuing to visit our own system in hopes of finding new updates after a four-month break from regular posting. A four-year run of (nearly) daily posting did exactly what I had hoped it would: taught me much about healthcare.

It also introduced me to an engaged community dedicated to transforming healthcare I didn’t know existed, proved to myself that it’s possible to have a voice of change without decades of experience, and evolved my thinking on numerous healthcare issues.

Toward the end of the blogging run I started to feel my writing wasn’t adding to the conversation. I was linking, linking, linking. Not thinking. Nor writing. Linking makes the web go ‘round—but there’s an invigorating satisfaction that comes with adding an original thought every now and again. That feeling was missing. So I stopped.

And took a lengthy break. I’m starting to get my flow back. I have notebooks and Google Docs filled with thoughts I want to explore and share. Within the last 30 days I’ve decided to start a new project. I’m not exactly sure what it’s web form will take but this post is committing me to making it happen. 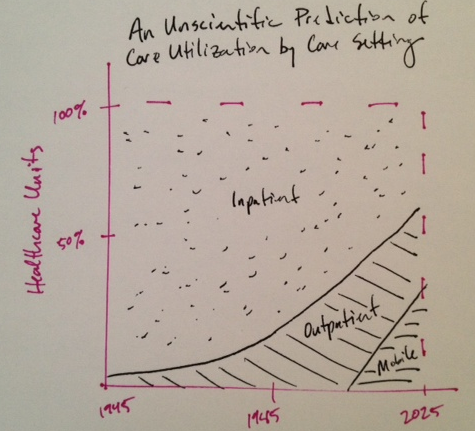 What I do know is that much of the new project will be about the chart I sketched here. Healthcare (all of it!) is under significant regulatory and free-market pressures like it has never been before. It’s a tremendously exciting time.

In reality that guess isn’t much of one. The growth of digital and mobile have completely transformed other industries. Some healthcare organizations have dove-in head first. Others are testing the water with their toes. By 2025, embracing mobile and digital won’t be a choice. Those who say no won’t be competitive by then, if they even exist. Lots of possibilities for thinking about the healthcare-wide implications. Stay tuned.

Tom Peters is angry at healthcare delivery; you should be, too

How can healthcare organizations help decision makers understand quality metrics? They shouldn’t. Organizations should signal quality through experience instead.

A new attitude for healthcare people to put patients where they belong: at the center of the healthcare world. You don’t need to wait for permission.  You shouldn’t wait for a directive. You, right now, can awesomize the healthcare experience.

So I suppose it’s possible I’ll get in trouble for almost completely posting Dev Patnaik’s revelation on the difficulty that big companies face when trying to solve big problems (think healthcare providers trying to solve the healthcare problem), but it’s just so damn important for everyone to read. So while it appears here, click over to Fast Co Design to read it. I don’t think “hybrid thinking” is anything entirely new, but it definitely is a wake-up call to the hyper-specialized crusade the business world is on.

It turns out that while large companies and organizations are phenomenally good at managing complexity, they’re actually quite bad at tackling ambiguity. A complicated problem is like playing a game of chess, an ambiguous problem is like having your in-laws over to dinner for the first time. In the latter situation, it’s not the number of variables that kills you. It’s what you don’t know that you don’t know.

However, the solution isn’t just gathering together different disciplines. I’ve attended several conferences on healthcare that tried to get a doctor, an economist and a priest to walk into a room. That’s the start of a great joke, but not an answer to the problem. Getting these folks together just results in having them talk past each other.

Hybrid thinking is more than just having multidisciplinary teams. It’s about having multidisciplinary people – folks who are one-part humanist, one-part technologist and one-part capitalist. When multiple disciplines inhabit the same brain, something magical starts to happen. The disciplines themselves start to mutate. They hybridize. We start practicing business like a designer – think Mark Parker at Nike. We shape technology like a culturalist – think Steve Jobs at Apple. And we start thinking about the most complex problems that plague our societies like an entrepreneur.

Some folks complain that Mark Parker and Steve Jobs are simply a rare breed – genius minds that show up only intermittently each generation. But that’s not true. What makes them rare is that they lead great companies – and that simply doesn’t happen often enough. You see, Parker and Jobs are entrepreneurs who built their companies, and as a result, their hybrid eccentricities were tolerated. It’s unlikely that their hybrid instincts would have survived in another organization. Twentieth century organizations have become extremely adept at grinding people down to become specialist cogs in their massive machines. Even at places like Nike and Apple it’s unclear whether hybridity is allowed to thrive when it’s not coming from the top.

In times of great ambiguity, we need hybrid thinking more than ever. And that means more than lip service. We may all praise Leonardo DaVinci, but we manage the world like we’re Henry Ford. And the world has changed a lot since the first Model-T rolled off the line. Isn’t it time that our thinking changed, too?

For reference, I tried to attack the ambiguity problem here a few days ago.

There has been a lot of talk (and blog posts) about accountable care organizations (ACO), medical homes, and value-based purchasing (I’m probably leaving a handful out)–especially since the reform package passed. It’s no secret the current model is too expensive and, frankly, doesn’t produce that great of outcomes for many patients.

But the interesting thing about all of this is that no one is quite sure how to proceed. Ambiguity isn’t something healthcare people deal with in a real productive fashion. Consultants aren’t that helpful yet as this is unfamiliar territory. Everyone is rushing around the country (have to do something!) trying to find examples of implemented ACOs (it’s a concept that is even difficult to define) and such (typical healthcare thing to do: what is everyone else doing?). All this while the words of someone I respect very much ring quite true, “if you’ve seen one model, you’ve seen one model.”

So here’s a thought courtesy of Saul Kaplan:

Instead of going to war to transform an entrenched operating model, create real world sandboxes right next door in which a new generation of transformative operating models can be explored. The imperative is to do R&D for new business models and systems the way organizations do R&D for new products and technologies today. The trick is to explore and test new models while at the same time continuing to pedal the bicycle of the current model. This requires establishing adjacent innovation platforms with the freedom to explore new ways to create and deliver value, especially approaches that are disruptive to the current model.  Adjacent innovation platforms must have the freedom to experiment with different rules and financial models.

Experimentation isn’t something this industry has been game to promote. It’s basically a not-so-secret skunkworks but with a connection to the old world. A networked environment comprised of individuals open to failure and iteration looking for connections. Read this conversation between two very smart gentlemen, Kevin Kelly and Steven Johnson, an excerpt:

Johnson: It turns out that the lone genius entrepreneur has always been a rarity—there’s far more innovation coming out of open, nonmarket networks than we tend to assume.

Kelly: Really, we should think of ideas as connections,in our brains and among people. Ideas aren’t self-contained things; they’re more like ecologies and networks. They travel in clusters.

Ambiguity gives us the opportunity to be creative. Being prepared to face unguided situations enables planners to be creative. There is a need in agencies for collective genius, where people act spontaniously, while prioritizing the larger picture.

If there is something healthcare organizations need right now, it is creativity and the ability to follow spontaneity when it arises. The hospital/typical healthcare environment isn’t one that supports this type of behavior: less creativity = more control = fewer problems. That’s understandable and expected when it comes to central lines; but when it comes to the business model, tried and true methods will not cut it. Fred Wilson writes that you need some contamination:

If you want to unleash more creativity in your company, you need to allow for a little contamination. It is the sand in the oyster that creates the pearl.

Saul’s sandbox idea might just hold the sand for the oyster to create the pearl. It all starts with just trying some stuff.

The creation of health has always been about partnerships. Health isn’t something that can be achieved in isolation. Unfortunately, patients today have come to depend upon the healthcare system to keep them healthy. And while providers are doing an amazing job when it comes to medical intervention, the reality is that American patients are in an unhealthy state. The way to fix this is to pursue co-created health. Read about it here.

Healthcare will come to depend upon a business model made prominent in the previous decade: co-creation. Co-creation is simply value created together by the customer and the firm. In healthcare that value is health and it’s created by the patient and their providers.

Bruce Nussbaum has written that today’s organizations need to be in the “enabling business” to be successful. He continues, “All the talk about platforms and convergence and content is about people building their very own products and services to fit their lives.” Healthcare needs to become an enabler of health, to allow and encourage patients to build their very own health-creating services in partnership with healthcare providers.

The transition to co-creation is a momentous challenge. Today’s healthcare service offerings are too often limited to the reactive approach of treating illness. Healthcare will always be necessary to treat illness; but there is an increasing societal need to also enable health creation. The reality is that the vast majority of healthy decision making relies on the individual responsibility of patients; for a plethora of reasons patients are struggling with that responsibility. Health as a partnership, co-created, marks the realization that traditional healthcare can do more to help patients lead a healthy lifestyle.

There are major changes happening in the United States healthcare system. Some have rightly described the way we currently provide healthcare services as “sickness care.” But these changes will require traditional healthcare providers to rethink the “sickness” approach. I believe the way to do that is to conceptualize health as a platform. Read about it here.

Recognizing health as a platform transitions healthcare to a new paradigm: creating health; it flips the approach from reactive to proactive. Healthcare doesn’t have to be just about fixing what ails you, it can also help you improve what isn’t.

Helping patients feel better means the traditional healthcare organization expands its focus beyond treating illness. It finds opportunities to help patients before illness occurs and supports patients after an intervention has occurred. Recognizing health as a platform does not diminish the importance of modern medicine. It’s about incorporating the totality of health-creating elements into service offerings. The recognition provides the proper context for a healthcare organization to expand and design health-creating services for everyone.

The decision to be healthy is one that must be made by patients. But judging by the most popular New Year’s resolutions, it is a decision that many struggle to realize. Here lies the opportunity: people need help finding a deeper connection to their health. The reorganization of the healthcare business model provides a unique opportunity for healthcare organizations to lead an effort to aid patients in healthy decision-making and redefine how we conceptualize health. It’s obvious that people need to be healthier and healthcare has the ability to lead the effort.